The election will take place eight months and 25 days after Blatter promised to step down following the dramatic US indictments against 14 football executives on charges including money laundering, fraud, tax evasion and racketeering. Michel Platini, who has received backing from four confederations but not from Africa and Oceania, is understood to be weighing up his options and will take further soundings at the World Cup draw in St Petersburg. Other potential candidates include the South Korean Chung Mong-joon, the Confederation of African Football president, Issa Hayatou, the former Brazil international Zico and the South African anti-apartheid campaigner Tokyo Sexwale. Read full article at The Guardian >>

The question is if Platini as a future president has the ability to change FIFA’s cultural problems. 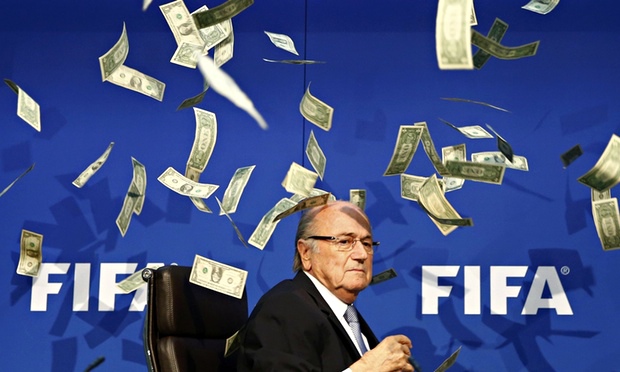 The Fifa president Sepp Blatter walked out of a press conference after being showered with fake dollar bills by the British comedian Lee Nelson. Nelson, whose real name is Simon Brodkin, illegally gained entry to the Fifa headquarters in Zurich and poured dozens of fake banknotes over the stage around where Blatter was seated after announcing himself as a North Korean World Cup delegate.